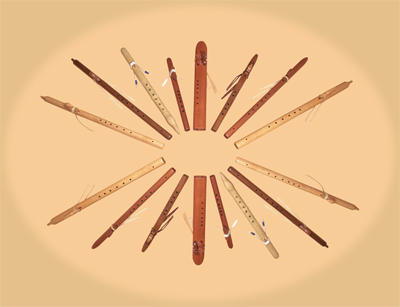 While living in Eugene, Oregon, I joined the most wonderful women's authentic movement group that I have ever been in, which met for nine months on a regular basis. It was there that I became very curious about the sounds of Native flutes for the first time in my life, after one of the women in our group said that my alto recorder meditation music sounded like Native flute music, which I had never heard before. I soon discovered my first Native American flute, (or should I say she discovered me), during an amazing global indigenous elder’s gathering that we sponsored in Eugene, and from the moment that I heard it's voice, my life was forever changed. I first saw, (and felt), this beautiful hand made flute all the way across the room in a glass case at the gift shop, and was called to play her as soon as she was in view. She turned out to be one of the most powerful visionaries, teachers, and spirit guides that I have ever found in my life, and has become a dear companion over time. I found out that she was actually a Lakota power balancing flute that was made in the old way, according to her creator, Albert Jim, who carved this amazing sacred instrument during the elders gathering underneath a full moon for several nights in a row. Apparently many people had admired her over the weekend, and I later discovered that she was a very unique, museum quality flute that was highly honored in the flute world. This spirit flute held within her the body and spirit of her tree, the heart and spirit of the Lakota flute maker, and the energy of every elder who we were honored to host at our gathering over the weekend. The first time I picked her up and played her, I burst into tears and was flooded with many visions of playing flutes as a Lakota medicine woman around fire circles in the Lakota tribes of long ago. Albert Jim said that I was playing their traditional songs, and for me, I was playing improvisational spirit led music whose every note came directly from my heart and soul. When I began playing this flute at gatherings, people started asking me to record my music, to which I replied, "this is what I do for healing and fun, and that my private practice was my life's work." At that point, my private practice seemed to transform into a shamanic sound healing practice over night, which has been a delightful full circle in my life because of my early love for music and connection with the shamanic world. I named this amazing teacher of shamanic sound my "Grandmother Flute," as her voice holds within it the ancient wisdom and truth of every grandmother I have ever known and loved. She has become one of my dearest spirit companions in life, and continues to become a stellar fire journeying flute and teacher. My life has never been the same since our meeting.

Once I met my Lakota Grandmother Flute at the elder’s gathering in Eugene, my entire life began to change quickly, both internally on a spirit level, and externally on an interpersonal level. I soon became very involved in the local Native American flute circles, as well as the ones that were springing up across the country and in Europe. I was one of the earliest regular members of our Oregon Flute Circle, which focused on playing Native flutes in many different forms, and was hosted by Sherry and Garry Kuhl, and Jeff and Joanne Calavan, (founders of the Oregon Flute Store). It was so wonderful to have an entire community of “fluties” to explore sound with, since I had been playing improvisational healing music on my recorder alone for most of my life. I met some wonderful flute players over the years in our circle, and was received with open arms by my flute family when my shamanic sound healing cd’s came out. It was at one of our flute circle gatherings that I first met R. Carlos Nakai. I joined the international flute circle that he started... INAFA, in which I was honored in their listings as a shamanic flute instructor. During many years of membership in the Oregon Flute Circle and INAFA, I recorded five shamanic sound healing cd’s, which was a very new and exciting experience for me.